Why Live Stats Improve Your Game?

Basketball is such a complex sport that there are rarely two games that are mirror image of each other. Even the same team might look completely different than the night before, and that is part of the reason why we love this game so much. Although scouting and game prep play a huge role in being successful in basketball, this sport doesn’t always rely on patterns determined before the game. Basketball is also a very dynamic sport which means there are a lot of events happening on the court at the same time, and it is sometimes difficult to get a clear grasp of what exactly happened. In recent years, there has been a lot of focus put on keeping live stats and how they influence decision making. Teams all around the world are starting to focus more and more on the trends that are happening while the game is being played, which gives more insight for coaching staff to make adjustments. Live stating your game could cause a crucial adjustment that helps your team win.

Picture a scenario where you are a part of the coaching staff for a certain basketball team. You are taking track of shot selection for your team and you notice that your players are shooting terrible percentage from corner threes. That might indicate that the game plan should be to avoid such shots and that the players should work towards getting open elsewhere on the floor. With that information, your coaching staff could shift towards attacking closeouts in the corner and getting an open look elsewhere. Moreover, if the opposing team is keeping live stats on your player’s shooting, they might employ a defensive scheme which would funnel the ball towards the corner. By constantly having information on what is happening on the court, coaches can not only see what kind of a day their players are having, but they can predict what adjustments the opposing coaching staff can make and counter it.

The beautiful thing about live stats is that coaches don’t have to wait to get into the film room in order to show players what they are doing wrong. Analyzing the game play by play with a cool head after the game is over can be very helpful, but it has little impact on the outcome of that game. It helps that the staff has the data to back up certain decisions in live time and explain to the player their mistakes through the numbers. It often happens that a player is unhappy with the decisions of the coaching staff because, in the heat of the moment, it is impossible to have an objective perspective on the ball game. Using live statistics to give evidence right away could not only improve the player’s performance later in the game, but it could improve the trusting relationship between the staff and the players. 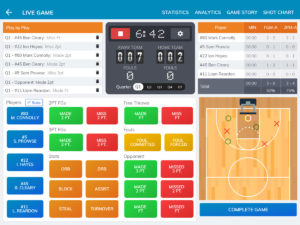 Clarity in keeping live stats is what should catch coaches’ eye. As seen in the image above, it is possible for coaches to quickly put in the information from the court, and then analyze it more. Keeping an eye on the minutes played of each player leads to good cooperation between players and the staff, and gives coaches a better perspective on how they can maximize the minutes of their best players. It can also help with team chemistry, as coaches are more aware of the minutes given out to their bench players. That way, they can find the balance with improving the quality of the 5 players on the court and keeping the team happy, easier. Keeping live stats can make coaches’ lives a lot less stressful.

Teams’ benches are starting to modernize more and more as the improvement of technology and analytics is making its way into basketball. The digitalization of tactics makes coaching easier for little things such as stats. Not only that, but they can use new platforms, such as tablets, in order to more accurately demonstrate their plays and ideas. Moreover, they give a platform for keeping live statistics which, as explained, improves coaching of the team. It is only a matter of time until tablets become a regularity on benches and replace drawing boards all together.