Blocks are reserved for the towering trees of the NBA forest.

Just being tall, you’re likely to stumble into a block or two. Hassan Whiteside, the League’s running joke as the basketball player least interested in playing basketball, lazes into 1.4 blocks in fourteen minutes of action per game.

Steals, conversely, are reserved for the NBA’s ranging predators. Those who pounce with ferocious, overbearing athleticism. Think OG Anunoby or Kawhi Leonard.

Neither description, though, is really all that true about the Portland Trail Blazers’ Robert Covington.

He is neither the spry, loping character you’d cast in your NBA Heist Movie nor the tall, hoppy protagonist in your NBA Blockbuster. He’s only 6’7”, sitting at the mean of NBA height. An apple tree amongst Redwoods. He’s not all that quick these days either. His predator analogy is more crocodile than wildcat.

Yet, there he is recording stats like he’s Joel Embiid or Marcus Smart. He’s 20th in the league in blocks per game, eighth in steals (sorry, to the league leader, Alize Johnson, but playing one game doesn’t really count) and third in deflections. No one ranks higher in all three than him.

It’s even more impressive if you remove the archetypes. Filter out anyone taller than 6’7”, RoCo is first in the league in blocks. Get rid of anyone younger than thirty, he’s third in steals and first in deflections. No one shorter than 6’7”, he’s fifth and third respectively.

You catch my drift here, right?

Despite being an average NBA dude. RoCo is performing at an elite defensive level. Kind of.

Defence can be thought of in two broad concepts: on-ball and off-ball.

On-ball is how we think of typical “defence”. The mano-e-mano, “you think you’re bedda den me?”, kinda stuff that, in some respects, makes basketball the most exciting. It’s what is most recognizable to the layperson’s eye and the most touted by fans and media.

The “showstoppers” get the All-Defensive Team awards (other than traditional centres, debatably, only Al Horford [2018], an a-bit-more-athletic RoCo [2018]. and Draymond Green [2015-2019] have won the award as “team defenders” of recent ) and the cool-ass nicknames like The Glove or Kobe Chopper.

All with good reason, of course. As much as basketball is a team game, Superstars are what win championships. Naturally, you want the best stopper to counter.

Basketball is a team game though. A Queen only as powerful as its complementary chess pieces. Particularly, in the NBA today, when rules and style of play favour the offensive player, off-ball defence is perhaps more important than it’s ever been before.

Team defenders are analogous to offensive linemen in football. The gluten of a team’s bread. They create malleability enabling teams to twist and stretch in stressful environments without breaking.

From a bird’s eye view, team defence is dirty work; to a connoisseur’s palette, it’s technical prowess. A good team defender fills gaps, busts screens, anticipates rotations, covers mistakes, breaks up actions, slows penetration, balances the weak-side, and, in the most emphatic moments, blocks the shit out of people.

It is, indeed, on the weak-side, where the intellect of a team defender is most pronounced. With the ball on one side of the court and a player’s defender in the opposite corner, the team defender has a dilemma. In traditional basketball, the help-side always steps in to stop penetration first. As the diagram below shows. 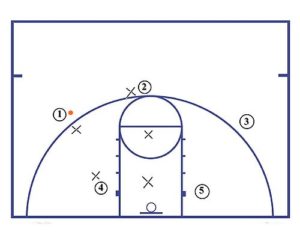 The X below in the key is the “weak-side help”.

In today’s NBA, it’s not so simple. Guys in the corner are more likely to bang a three or get open for a backdoor lob or cut.

Teams have different approaches. Some surrender the lane to limit corner threes. Others stuff the key and hope for a high rate of missed shots. Either way, a team defender hopes to accomplish both.

Many in the League are no better than the painted cardboard fans you see at COVID-era sports arenas. They’re there, but they’re not really there.

It’s a true balance. Overcommit and a good passer finds the open shooter for an easy Splash. Undercommit and you concede layups or, worse, fouls. The worst defenders simply do nothing. The greatest manage their own player while also harshing the vibes of others.

Something Robert Covington has mastered.

In his earlier years, RoCo was more of an on-ball guy, overseeing perimeter meanies like Kris Middleton and DeMar DeRozan – especially in Philadelphia where he and Ben Simmons were the only true two-way players on the team.

But even then, he was not particularly quick. Coming out of Tennessee St., scouts were wary of his limited lateral quickness. There was a concern that as a “tweener” – a mark of death pre-space-and-pace days – he could neither hold his own on the perimeter nor size up bigs down low.

He proved them wrong, mostly.

RoCo has a 7’2” wingspan (for reference, Jayson Tatum and Scottie Pippen are both 6’8” and have 6’11” and 7’3” wingspans respectively). He succeeded defensively by leveraging his Dhalsim-like limbs to gain a millisecond or two against quicker players and troubling shooters, and to decrease height differentials in the post.

But his lack of quickness remained an ongoing issue. Most anyone with an explosive first step got by him. Guards sauced him up like a hollandaise. He was never truly the 3&D machination that every GM fantasizes over.

As he aged – and the League quickened – it became more apparent. RoCo’s slowness shuffled him down the chain; his perimeter responsibilities dwindling.

Last year, the Houston Rockets swapped their last vestige of Modern Basketball, centre Clint Capela, for the Post-Modern look of RoCo at centre. He and PJ Tucker shared big-man duties. They switched everything and rebounded as a collective. It worked quite well until it didn’t.

Anthony Davis was too much of everything for the Rockets in the Playoffs. The idea of a centre-less defence perhaps a bit too audacious – the Toronto Raptors are feeling that much too severely right now. But the experiment further demonstrated that RoCo, and his supreme length, were best roaming the backline more than marauding the three-point line.

In Portland, alongside a traditional centre, Covington has settled into the power forward position playing one of two defensive roles.

In unique cases, he takes larger ballhandlers – Zion Williamson, Giannis Antetokounmpo, Ben Simmons, Jerami Grant, Anthony Davis, etc. – where his size and emoji-shoulder-shrug quickness suffices. For the majority of the time, though, he is tactfully tucked away on less-threatening scorers or, at least, more predictable ones.

Portland’s defence stinks. Bad. Real bad. They are second-last in the league in points allowed per possession, basically allow the best eFG% in the league, and create few turnovers.

Their perimeter is porous and small. Their middle…vertically challenged. Portland Trail Blazers’ Head Coach, Terry Stotts, has decided to give RoCo the same free rein on defence Dame Lillard possesses on offence.  “We’ve nothing to lose. Just go get the ball.”

Stotts and Covington’s gamble is this: stifle all first options, recover late on secondary ones, and hope for the best. That’s not an atypical approach, but Covington has more leeway than most. Stotts empowers RoCo’s sharp intellect and length to cause chaos.

He floats the court like a carrion bird waiting patiently, observing actions, reading body language, and watching eyes. A middle linebacker playing QB Spy readying for the precise moment to intervene, which, with a perimeter defence like Portland’s, is inevitable.

He is almost always skulking the long grass of the key, waiting to pounce on the unsuspecting.

See how far off he is from Alex Caruso. Enes Kanter is a cement barrier, he’s not stopping pick n’ rolls. The world knows that. RoCo is virtually shadowing Kanter. As Dennis Schröder attacks and Gary Trent Jr. fights through the screen, Dennis discovers RoCo’s presence. He then proceeds to Steve Nash himself through the lane to try and find a weak-side shooter (RoCo’s man). Here’s where RoCo’s excellent positioning and length shines. He remains with Schröder preventing a curl and a pass to a cutting Talen Horton-Tucker while also seamlessly transferring back to Caruso to fend against his own attack.


RoCo’s skill, too, is knowing when not to help. Less-experienced defenders will too strictly obey the weak-side rules: they are the final line of help. But if the attacker is not a great finisher or is a pass-first creator, or the weak-side offender is a sharpshooter then the more intelligent play may be not to bite. He does exactly that by judging Caruso to be less crafty and less of a finisher. He bluffs Caruso hoping it’s enough to scare him out of a lay-up. It works, Caruso kicks it back to Markieff Morris, a recovering RoCo praying he misses the three. He does.
This style of defence definitely does not always work. RoCo gives up more open threes than he, in a normal situation, probably would. No fault of his own though. It’s part of the scheme. Portland tries to mitigate that vulnerability by putting RoCo on the worst shooting option.

This lets RoCo’s predatory instincts and alien length go wild. He’s disrupting plays, converging on players before they can suss it out, and cheating on help-sides to strip and block attackers.


Those types of plays are why he has become such a prolific stealer, blocker, and deflector this season.

His managing of the weakside domain also makes him an effective defensive rebounder – ranking 32nd among players who have played more than 20 games this year (sorry KD and, again, Alize) – pulling down the most of his career.

Defensive rebounding is a bit of a red herring data point – Chris Herring – no relation to the red one – wrote about the limited impact good rebounders may have on the game. Nonetheless, Portland is a small team, only Enes Kanter and Nurkić average more than five a game. His rebounding presence has value.

Of course, neither RoCo nor the system is perfect.

Sometimes, he over commits and misses his rotation altogether as he does here giving James Wiseman a free lay-up. Or, if his man is suddenly the focal point of a play – like Frank Kaminsky in the second play – while RoCo is Third-Eyeing the court, it’s a total Cluster-F. And, sometimes, he’s so intently focussed on ball-hawking, he completely forgets that he is even guarding a basketball player.


The risk is clear though. When he isn’t around to disrupt, things are just as bad or worse.

With RoCo on the floor, Portland allows four fewer points per game. For players who have played over 1000 minutes this season, he has the seventh-best defensive RAPTOR. Pretty good, considering only one other person on the team has a positive score and they have the second-worst team defensive rating in the league.

It is what makes Robert Covington such a marvellous case study. He – like Nikola Jokić and TJ McConnell and others – deviates from the ideal NBA defender. He is not the tallest, jumpiest, or quickest.

Instead, he uses his understanding of the game and intuition – and long arms – to outmanoeuvre his athletically superior counterparts.