5 Defense Drills Every Coach Should Know

It might seem that the evolution of basketball has put more emphasis on the offensive side of the game with the shift towards the three-point line. The flashiness of the high difficulty shots that have become normal in modern basketball, often outshines the defensive effort required to prevent the shot. I would argue that defense is more important than ever, as players have evolved their offensive games to a whole new level. Playing good, fundamental defense might not be enough stop your opponent from scoring every time, but that should be the goal of every defensive minded team. Developing player skills and the feel for that side of the floor is a crucial job for every coach, as the team is defensively strong only if all the players are working on the same page and understand defensive concepts. For example, a game plan could be to force your opponents to the baseline in order to cut off space, but if the player on the help side isn’t aware of how to position himself/herself properly as the help defender, the whole defensive scheme fails. Similarly, other players need to be aware what their rotation is the whole time in order to have a successful defensive possession. That’s why it is important for coaches to introduce defensive elements and help their players master them one by one. We will take a look at the 5 drills that are crucial for any coach that wants to have solid team defense.

Let’s start with the basics. Individual defense is at the core of having a good defensive team, as there is no need for other players to help out if the opponent can’t go through a certain player. That’s why it is important to develop defensive skills in one on one situations. The drill is very simple. The defender starts with the ball in the restricted area while the offensive player is on the three-point line. Note that the attacker can stand on any position on the perimeter, and coaches should mix up their position in order for the players to be comfortable with closing out in all areas of the floor. The drill starts with the defender passing the ball to their opponent and sprinting to close out and prevent the shot. When closing out the player should start with big steps to cover ground and progress into smaller ones when coming closer to the attacker in order to not get beat of the dribble. The defender should also have their hands up in order to contest the shot and disrupt passing lanes. This drill is perfect for introducing the most basic concept of team defending. A player can be forced into multiple closeouts in only one possession so it is very important to do it right. Moreover, defenses scramble less with good closeouts and have less ground to cover if everything is done properly. Listen to the former Arizona head coach Sean Miller as he explains how one on one closeouts work:

Let’s expand towards a bit more complex drill. This drill expands the one on one game to full court, teaching the players how to stay in front of their opponent throughout the length of the court. This drill is good for learning transition defense and the adjustment required towards half-court defense. The drill starts with the defender guarding the player one on one in the backcourt. As they progress into the other half two players join on both sides, starting the live phase of the drill. Not only does the individual defender learn how to pick up a player full court, the three on three part helps all the defenders learn how to defend cutting, screening and team defense on a smaller scale. It also simulates the in-game experience and forces the players to make quick decisions on the defensive side of the floor. Coaches can then give them feedback about how they want to defend the transition and model the defensive scheme towards their liking.

After learning the main principles needed for team defense, you can start showing your team how a 5-man defense should work. Defending as a team takes a lot of concentration and communication, as all 5 players need to be on the same page for it to be effective. The main idea is that there is always the help side in case anyone gets beaten off the dribble, and other players need to know how rotate out of this tough spot and manage to cover all offensive players. The 5 on 5 positioning drill is perfect for learning these elements as it simulates live game situations. To start it off, it is recommended to make the offense stationary and just pass the ball around in order to move the defense. The defending players will then learn what role and position they have to take depending on where the ball is, making them more comfortable in different defensive scenarios. The next step would be to introduce one dribble for the offense and allow them to attack closeouts. The defending players will then learn how to recover from a handicap situation in a correct way through rotations. For example, the defender that gets beat off the dribble would leave his/her assignment to the help defender, while rotating to the player that is the least threatening in that moment. When your players figure out how proper rotations work, introduce live play to fully simulate the in-game experience. Loud and clear communication needs to be encouraged at all times! The main concepts of team defense can be found explained here:

The drills above have had more focus on the tactical part of playing defense. The defensive specialist drill focuses on preparing players to be physically ready to play hard defense all game long. There is no ball in play and no offense. There are only cones and defenders who go through them in various ways that simulate defensive movements. The drill is prepared by putting two cones on the perimeter at 45 degrees, and two cones on the extended low block. The player sprints and closes out on one of the perimeter cones, backpedals to the low block one, slide to the other low block cone, sprint and close out to the other perimeter cone, and finally slide all the way over to the sideline. By doing various high intensity movements in a short period of time, the players will get used to playing hard-nosed defense regularly and be able to endure multiple effort plays. If the description seems confusing to you, the graph below clearly shows how the drill should be executed: 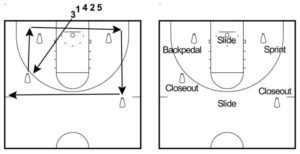 Speaking as a former player, this drill is one of the hardest ones I had to go through. The main idea is to practice the handicap situations in which there are more offensive than defensive players in play. This will force your players to work twice as hard to contain the offense, and the only way to do that is to communicate really well and make the right rotations. The drill starts with 4 players on the perimeter and three defenders who are guarding the ball and the first passes. In the beginning, you should make the offense stationary to allow the defense to learn how to rotate while having a deficit in players. After your players are more comfortable with the patterns, you can introduce dribble penetrations to force the defense to scramble. In the end, your players should be able to defend live possessions with one person less somewhat effectively.

While the drill in the video is different as the 4th defender joins his teammates after a certain period of the time, we can see how three defenders can cover four players if they know how to rotate. This drill will improve your players’ defensive instincts and make them elite in regular, team defense.